Home > Product Reviews > Home & Garden Product Reviews
When you buy through our links, we may earn an affiliate commission. As an Amazon Associate we earn from qualifying purchases. Learn more.

After watching a segment of the Dr Oz Show where he showed a Snore Relief Pillow, I was determined to figure out who makes and sells such a pillow.  Thank goodness for Google and its image searching capabilities, because that is how I came to find the Sona Pillow

, which looks like the Anti-Snoring Pillow that Dr Oz spoke about.  The creators of the Sona Pillow

sent me one of their anti-snoring pillows to test out.  I originally planned to let my husband use the Sona Pillow

, because he is the one with light snoring and perhaps mild sleep apnea … but wait until you read about what happened! 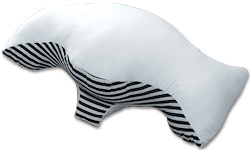 can be spotted a mile away because of its unique shape and its signature stripe pattern on the bottom.  I was curious as to whether this would be a firm or soft pillow and whether it would actually be comfortable to use or not.  After taking the Sona Pillow

out of its package, I was impressed by the firm support of the pillow.  I am not a fan of soft wimpy pillows – the firmer the better to me.  I slipped the Sona Pillow

into the machine washable pillow case that it comes with and put it on my husband’s side of the bed for him to use that evening.

My husband was not fond of the idea of me taking a photo of him sleeping in bed and posting it on the Internet, so you can see another nice man (who is not quite as cute as my husband!) demonstrate how to use the Sona Pillow

in the photo above.  Basically, you place an arm under one of the indented sections of the pillow and rest your head on the middle section.  My husband used the pillow for several nights, and while he used it, his mild snoring did seem to improve a bit.  The only problem is that he would wake up in the morning with the pillow on the floor.  It was almost as if he could not adjust to sleeping in this exact position on his side for the entire night, because he tends to be a back sleeper.

Being a side sleeper myself, and loving firm pillows, I decided that I wanted to give the Sona Pillow

a test run even though I do not snore.  It did take some getting used to, but after a few days of “breaking it in” I found the Sona Pillow

to be exactly what I would want in a pillow.  My sleep improved and I did not toss and turn nearly as much.  After hearing how much I love the Sona Pillow

, my husband said he wanted to give it another try – so it looks like we will be ordering another one because there is no way that I am parting with it now!

To read more about the Sona Pillow

and its patented design that was approved by the FDA as a medical advice, please visit the Sona Website.

Signup today for FREE and get the hottest exclusive deals and freebies in your inbox!